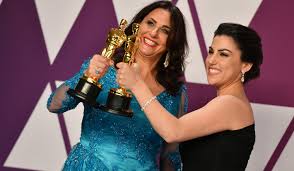 Rayka Zehtabchi and Melissa Berton have won an Oscar for Best Documentary (Short Subject) about the taboo of menstruation in ‘Period. End of Sentence’. It is set in a rural village outside of Delhi, India and speaks about the restrictions girls and women have with their period. Menstruation is often seen as something that is “dirty”. Even women who have had it for years do not understand why they are bleeding each month. Some believe it to be a curse. The stigma of menstruation can stop girls from going to school to the point of dropping out of school, women from going to work, worshipping at a temple or being totally isolated from their community. It can be a source of shame for a lot of girls and women.

In the documentary, which is available on Netflix, it talks about a project www.thepadproject.org started in California, USA where some high school kids started fundraising for villages to setup a machine that makes biodegradable pads. The materials are sourced from the local area at the cost of 5c per pad. Currently, females are using dirty rags, leaves, newspaper which can lead to infection. It is hoped by winning this Oscar, that this project has an enormous platform to be better promoted as well as raising awareness about the inequality that is still so evident worldwide. What is now argued to be the quote of the Oscar night by the Producer Melissa Barton exclaiming “A period should end a sentence not a girls’ education!” The picture below is the village in the documentary celebrating the win. Congratulations on raising awareness about what should be a normal part of a female’s bodily function that is so essential in bringing wonderful life into the world!

Is Belly Breathing all it is made out to be?
Sitting Posture