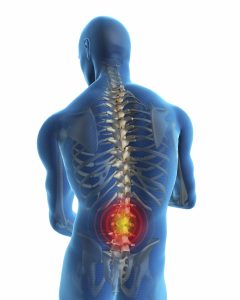 I had a client come to me recently having injured themselves deadlifting. Understandably, they were upset that they were hurt, and worried that it would slow down their progress they’ve been making in the gym. They went to their doctor who sent them for a scan which found a minor disc bulge. Their first question to the doctor was ‘will I be able to lift again?’ When this doctor told them ‘no’, it naturally caused a lot of worry.

The first thing I had to do was reassure them that this isn’t a death sentence, that they’re not dying and that their future is not going to be taken away by the findings in the scan.

We’ve all been hurt at some stage and the last thing we want to hear is that you can’t do what you love to do anymore.

The body is great at repairing itself from small to moderate injuries. A term we throw around is natural history – it basically means that eventually, it will get ‘better’. This is especially true in the spine. The spine is a passive structure that is controlled by the muscular system that actively controls our movement.

One thing I’ve learnt in my time at Inspired is that a scan does not predict what treatment a client or athlete will get – the assessment determines what treatment is required.

This doesn’t mean just sit around doing nothing though, there’s always something we can do to either improve, or work on to minimise the risk of it occurring again. The goal with my client is to get them out of the immediate pain they’re currently experiencing by restoring movement back after being scared to move for over a week, and addressing the movement patterns that lead them down the road to injury.

After seeing them in the clinic and going through an assessment, I was able to say with some reasonable certainty that this client will get back to lifting again, and with some modifications, encouraged them to go back this week! Sometimes, all we want to hear is what we can do, not what we can’t.

At Inspired Physio, we understand training, because we do it. If you want a physio that ‘gets’ it, reach out today!

Back pain and Acro
Sitting Posture